Hey, remember me? I am that guy who wrote that one article about raw terminal IO. I am back with more terminal stuff!

But this time it's less scary, because this time I took care of the annoying bits so you can focus on having fun!

In this small article I'd like to introduce zig-spoon, a zig library for creating TUI programs. It is still very much work in progress (which includes the API and documentation, naturally) and does not have everything I want it to have yet. But even in its current ~20%-of-the-finished-thing state, it already takes care of up to (and likely more than) 80% of the work of creating TUI applications - well, at least the UI part.

Here is what is available right now:

While most modern TUI libraries use a widget tree, similar to true graphical toolkits, I instead opted to just plop the user into a "clean canvas", which makes zig-spoon considerably more powerful and - at least in my opinion - useful. That said, if everything goes according to my plan, there will eventually be a purely optionaly character buffer and widget graph system you can user on top of the current design.

While there is still a lot to do, I expect the first release (0.1.0) to happen this year.

Now that I have spilled the advertisement blurb, here is some code, so you can get a feeling for how it works. The API is still a bit raw and has a few rough corners. 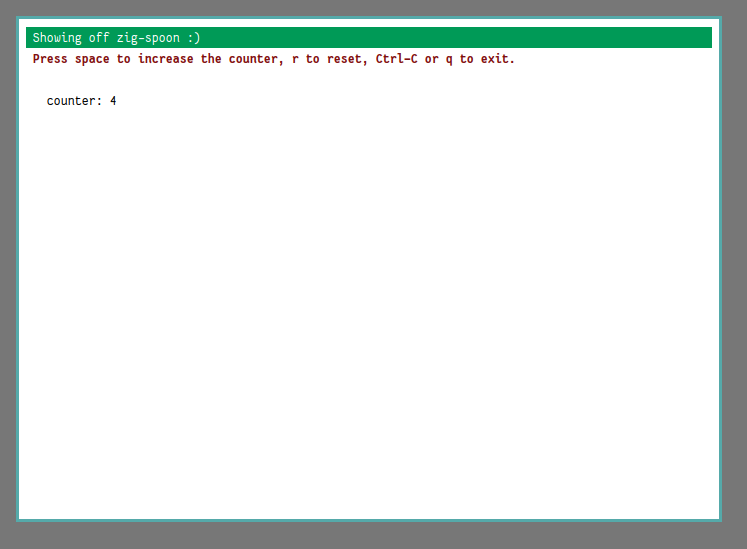 And most importantly: This isn't just a toy project, zig-spoon arose while working on real-world projects (which I will also show-off eventually), so it will be continuously improved and kept up-to-date as long as I use my own tools.

Any feedback is welcome :)

Oh, and before I forget, here are the current caveats:

Leon Henrik Plickat
Just a FOSS developer who is fond of everything low-level, 90s science fiction, loud music and dogs.
Want to create a TUI application? - The Basics of "Uncooked" Terminal IO
#terminal